Studying the impact of climate warming on agriculture in Pakistan 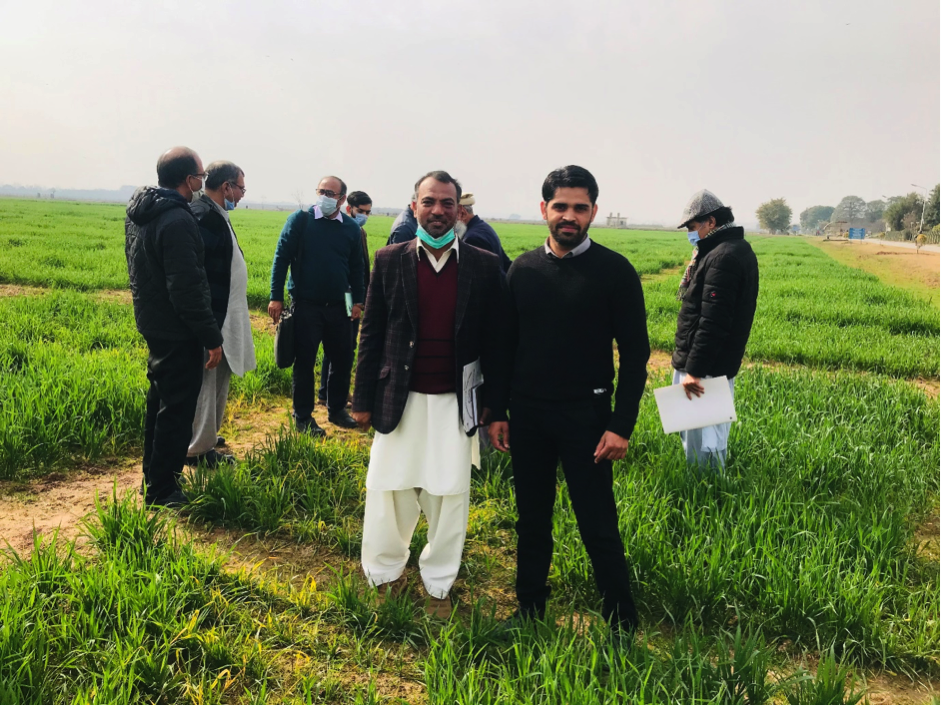 “The project created impact in different ways: 1. on technical aspects, 2. by nurturing collaborations and 3. by introducing new individual researchers. The methodology and data adopted in this project was shared with other relevant institutes in Pakistan, which is being utilised further for better water and agriculture management”.

“The project created impact in different ways: 1. on technical aspects, 2. by nurturing collaborations and 3. by introducing new individual researchers. The methodology and data adopted in this project was shared with other relevant institutes in Pakistan, which is being utilised further for better water and agriculture management”.

Changes in temperature and CO2 significantly increase climatic warming, and the effects of climatic warming on agriculture have become a substantial issue. Agricultural systems globally, directly respond to climatic change variables including temperature, precipitation, CO2 concentration and solar radiation; these climatic variables affect current agriculture practices such as irrigation management, crop phenology, fertiliser use, and sowing dates. The current situation of climate change shows that production of crops will be reduced by increasing temperature, while several scenarios could overcome increasing effects of CO2 concentration and reduce the heat stress on crops. The impact of changes in precipitation, rising CO2 and increasing temperature on crop production are very complex. The significant impact of climate change can change crop yield, irrigation system, cropping pattern and intensity. Therefore, our research questions were: 1) how can a rise in temperature affect crop yield, and 2) how can climate change alter the irrigation pattern.

Overall, as a group, we enjoyed working on the proposed idea with the funding and support we received from Leading House South Asia and Iran. Researchers from both sides (Swiss and the partner country) acquired significant knowledge regarding local agriculture, climate and predicted conditions. For instance, collaborators discussed several aspects of climate change impact on the agriculture system of the country under study (i.e. Pakistan) and then suggested several strategies to cope with potentially harmful impact in future scenarios. Additionally, apart from principal investigator (PI) and co-principal investigators (Co-Pi), several other researchers from both sides, such as Dr. Ejaz Hussain (senior researcher) from Pakistan and Dr. Syed Saeid Ashraf Vaghafi (young researcher) from Switzerland, in addition to two local young scientists from Pakistan (Master’s level students, Fatima Ilyas and Afia Sarwar) contributed and got substantial knowledge to boost their careers. During the planning stage, important synergies were established with several other institutions from 7 different countries of the world by taking our seed money project onboard with another project ‘KnowledgeForClimate‘.

The Leading House managed funding and other management issues very well and in a timely manner. Their support was very positive throughout the duration of the project.

The project created impact in different ways: 1. on technical aspects, 2. by nurturing collaborations and 3. by introducing new individual researchers. The methodology and data adopted in this project was shared with other relevant institutes in Pakistan, which is being utilised further for better water and agriculture management. The project benefited significantly from the Global Change Impact Studies Centre (GCISC), Islamabad, National Agriculture Research Centre (NARC) and International Center for Agricultural Research in the Dry Areas. This collaboration with the aforementioned institutes ensured that the methods and approaches implemented under the SEED project were consistent with, and fed into, the overall regional strategy for agriculture monitoring being developed by the institutions.

The calibrated and validated crop models (APSIM and STICS) are being utilised for other regions based on similar properties (climate, soil and cropping pattern). Furthermore, the project partners are exploring other opportunities to secure long-term funding to enable further integration of the recent release of CORDEX Regional Climate Models (RCMs) and CMIP6 (most recent generation of climate models) with crop models. We aim to expand our collaboration to undertake other studies relating to the impact of climate change in South Asian countries, including high altitude mountain ranges such as the Himalaya, Hindukush and Karakorum. With the integration of NUST and Muhammad Azmat in the international network ‘KnowledgeForClimate’, we have achieved mechanisms for longer term collaboration and an extension of the collaboration network.

As a co-principal investigator of the project, I received great support (financial and technical) from the Swiss partners (PI Prof. Dr Christian Huggel and Dr. Saeid Ashraf Vaghafi). It was with their technical support that we submitted the final project report on time. Both partners (Swiss and Pakistani) worked together extensively and provided great support to each other.

Muhammad Azmat is Assistant Professor at the School of Civil and Environmental Engineering, National University of Sciences and Technology, Islamabad, Pakistan. He has more than 10 years experience of working in the field of climate change impacts, risks and adaptations in South Asia.

Christian Huggel is a professor at the Department of Geography, University of Zurich, and head of the research group EClim: Environment and Climate: Impacts, Risks and Adaptation. He has long-term experience working in the field of climate change impacts and associated adaptation, including in South America and South Asia. He currently serves as a Lead Author for the IPCC 6th Assessment Report.